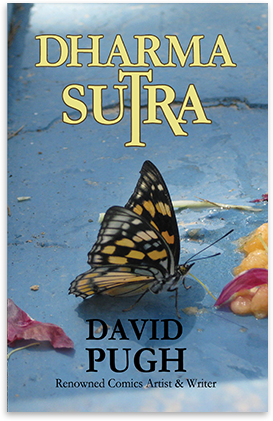 I have always been a storyteller, albeit mostly in comic book pictures rather than words. I envied the fact that the writers I worked with would spend a morning writing what might take me a week to draw. I had the reputation of being the artist who put a lot of detail into his illustrations. As a writer I still attempt to paint a vivid and well constructed scene.

After a few years of drawing adventure I was beginning to feel the strain of the crippling deadlines, my week comprised of working 9am to midnight Monday to Thursday, 9am to 7pm on Fridays and Saturdays. Those nights I was drinking quite a few beers late into the evening, sitting there at the kitchen table in the glow of the cooker’s extractor fan light. I listened to Leonard Cohen and wished my life was as full and rewarding as his had been and I dreamt of “satisfying one night stands.” My son thought I was a sorry sight and named those evenings as my Extractor Fan Blues. He said it must have been some hope that the extractor would suck me away to a more exciting life. I wanted to savour the possibilities of what else life could offer me.  I projected myself into some bar in South Asia and lived there for an hour or two in my alcohol fuelled imagination. It may sound selfish but I was suffering from cabin fever, I had to escape those crippling deadlines. In my defence, I always gave over my Sundays to the family, when I was Dad and all theirs. These days I have the freedom to live the adventure and have been fortunate enough to find myself in many South Asian bars and they are as good as I imagined.

Christmas 2001 saw a planned family road trip around Southern Africa cancelled following Air Gabon ceasing its flights after 9/11 and they refunded our ticket money. The Gambia was the only alternate African destination available within our budget; we packed and flew to Banjul. Within a few days of exploring we met the palm tapper who was to become a good friend for many years and the inspiration for Remus Jallow. The reader has to decide how much of the early chapters of DHARMA SUTRA are true, enough to say that the Guinea Bissau journal is based on a real journey I undertook with my African friend.

Three years after the first trip to the Gambia, on a month long train journey around Rajasthan, I visited Pushkar and was startled to come across a sahdu, the image of my Gambian friend. The likeness was astounding, even similar dreadlocks and I thought that my palm tapping friend would feel very comfortable as an Indian holy man, smoking ganja all day in the sun. It was then that the first embryo of the novel was conceived and over the years and across the travels the child grew inside my head. 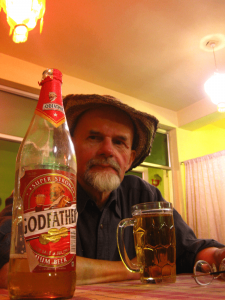